Radio and TV presenter Anne Diamond visited the museum on 4 May, a week after interviewing chairman Richard Poad about royal visits to Maidenhead.  But this time she came to fly our Spitfire simulator – and what fun she had.  The photos show Anne with volunteer flying instructor Bernie Kuflik and the view  from the cockpit as she approaches Tower Bridge at high speed.  She flew the Spitfire cleanly through the centre of the bridge. Well done, Anne! 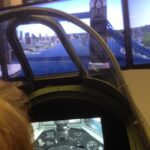 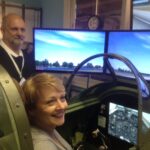 A few tickets are still left for this illustrated talk on Wednesday 20th April, celebrating the 90th birthday of The Queen. Our Chairman Richard Poad will start with a swift gallop through the royal connections in Maidenhead history before concentrating on visits to Maidenhead and nearby villages by the Queen and other members of the royal family.

Our  exhibition THE CHANGING FACE OF MAIDENHEAD is now closed, replaced by THE STORY OF SKINDLES. Inspired by the discovery in our archive of 190 photos of Maidenhead shopfronts taken in 1984, the exhibition lookED at the changes to Maidenhead’s central shopping areas over the last 30-50 years. Photos of High Street jammed with traffic show that by the late 1960s, something had to be done – which led to the pedestrianisation of High Street and the construction of the Nicholsons Centre. With the shopfront photos arranged into panoramas you can stroll up High Street and along Queen Street and see the type of shop you have forgotten ever existed. Fishmongers, butchers, greengrocers and even a Wimpy Bar have all disappeared. In Market Street a pub is the only building left over 40 years old, and King Street has been equally transformed. The exhibition endED with a glimpse into the future, with artists impressions of the Chapel Arches scheme (under construction) and The Landing (no start date announced).
Read more.

80 years ago, on March 6 1936, the Spitfire made its first flight from Eastleigh airfield at Southampton.  This beautiful aeroplane became one of the most famous aircraft ever built: during World War II over 22,700 were built, and it was the only fighter in production throughout the war.   250 examples of the blue-painted Photo Reconnaissance Spitfire were assembled not far from Maidenhead, at a grass airfield east of Henley called Upper Culham Farm.

What was it like to fly?  Diaries and filmed interviews with ATA veterans in our collection at Maidenhead Heritage Centre contain frequent comments such as “Sweet as a nut” and “the sweetest airplane ever built”.   Our popular Spitfire simulator lets you come and try flying this iconic machine – just phone 01628 780555 to book your flight.  COME FLY WITH US!

On Saturday February 6th we were delighted to welcome to the museum 91-yr old Martin Nicholson, who flew for ATA in 1944 and 1945.  Martin took to the air in our Spitfire simulator, landing at Heathrow and then flying around the skyscrapers of modern-day London.  The photo shows him concentrating very hard while his son Anthony looks on.  We have two filmed interviews with Martin in our archive which casual visitors can watch on the computer in the ATA exhibition area.