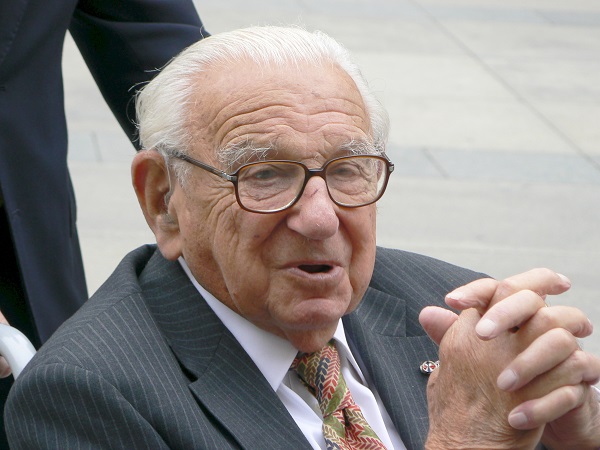 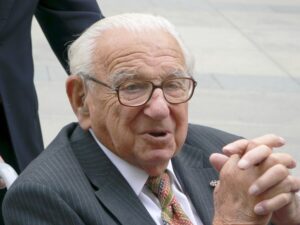 A Maidenhead resident dubbed the ‘British Schindler’, he rescued 669 children from the hands of the Nazis.

Oaken Grove Park in the north-west of Maidenhead is the splendid home for the Sir Nicholas Winton Memorial Garden.  The garden was opened by Maidenhead’s member of Parliament Theresa May on 14th July 2017, attended by Sir Nicholas’s children Barbara and Nick Jnr, the Czech and Slovak ambassadors and other guests.

The garden is an integral part of the open park and free to enter. Today’s kindern are welcome to run around and play and there is plentiful seating. It tells the story through several themes, including railway sleepers and various thought-provoking quotations from Sir Nicholas.

The Maidenhead Waterways area is the centre of the town’s regeneration. The Coppa Club hosts a statue by Owen Cunningham celebrating Sir Nicholas Winton’s life.

The text on the panel reads:

This sculpture has been installed in memory of Maidenhead resident Sir Nicholas Winton (1909 – 2015).

Sir Nicholas Winton saved 669 children, most of whom were Jewish, from Czechoslovakia on the eve of the Second World War. In recognition of this, Sir Nicholas Winton was awarded the highest honour of the Czech Republic, the Order of the White Lion (1st Class), in 2014 by Czech President Miloš Zeman. This sculpture is a representation of the lion which forms the centrepiece of the award and acts as a homage to this highly treasured local resident.

Sir Nicholas Winton was knighted in 2003 by Queen Elizabeth II for Services to Humanity and in the same year was also awarded the highest state decoration of the Slovak Republic, the Order of the White Double Cross, by President Schuster.

On what would have been his 111th birthday, Sir Nicholas Winton was celebrated by Google as their choice for the “daily doodle”. It was shown in the UK, the Czech and Slovak Republics, Latvia, Greece, Iceland and Canada.

Google published a very interesting biography on the day, with the support of the family, containing several photographs. Download PDF.